Bulgaria’s accession to the European Union on 1 January 2007 has created conditions for substantial changes in the national legal system. The provisions of the EU legislation and the case law of the Court of Justice of the European Union (CJEU) in Luxemburg are an integral part of the domestic legislation of the EU Member States and they have precedence over the national legislation of these countries within the EU territory.

Undoubtedly, the Court of Justice of the European Union (CJEU) plays a key role in the harmonization of the supranational and national law. The model of integrating the EU law in the national legal systems of the EU Member States does not rely on any mechanical imposition of supranational sources of law; it builds on the underlying principles of the CJEU case law. Lawyers play an increasingly important role in the effective exercise of the procedural rights of individual citizens and legal entities within the framework of the national jurisprudence and its European modernization through a thorough knowledge and application of the CJEU procedures and practices. These issues and their practical solutions offered by practicing lawyers within the framework of the CJEU procedure, the invaluable perspective of EU judges and the academic analysis made by representat! ives of the legal doctrine provided the substance of the two-day discussion of the role of the lawyer in the interaction between the CJEU and national courts. 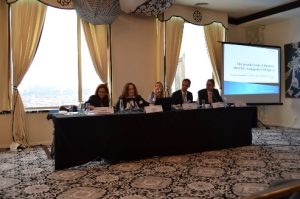 In this connection, on 25 and 26 September 2015, Sofia hosted the seminar The Court of Justice of the European Union (CJEU) and the National Court – the Role of the Lawyer organized by the International Association of Lawyers (Union Internationale des Avocats – UIA), together with the Supreme Bar Council and the Sofia Bar Association.

The panel of speakers included judges from the Court of Justice of the European Union, including judge Mariana Kancheva, Bulgarian judge at the General Court in Luxemburg, as well as Bulgarian and foreign lawyers with experience in CJEU cases and members of the academia.

Participants in the seminar were also Grozdan Dobrev, attorney-at-law and National Representative of the UIA for Bulgaria, Katerina Gramatikova and Todor Manev, attorneys-at-law at Dobrev&Lyutskanov Law Firm.

Katerina Gramatikova was one of the speakers at the seminar and her presentation focused on the amendments to the Bulgarian Bar Act in the light of the freedom of the provision of legal services and its harmonization with Directive 98/5/EC of the European Parliament and of the Council of 16 February 1998 to facilitate practice of the profession of lawyer on a permanent basis in a Member State other than that in which the qualification was obtained. She drew the attention of the audience to the restrictive provisions of the Bar Act before its amendment in 2010. Those provisions allowed only Bulgarian nationals to become lawyers and only Bulgarian lawyers could establish partnerships of lawyers and law firms. It was impossible for a foreign law firm to open a branch and the names of law firms had to comply with the restrictions laid down in Article 59 of the Ba! r Act. The speaker outlined the infringement procedure which the European Commission opened for failure to comply with the EU law and led to the amendments to the Bar Act.

The amendments to the law produced multiple effects. First and foremost, they vested EU lawyers with the same rights and obligations which national lawyers had and thus any EU national who had graduated in law in Bulgaria was given the right to register as a lawyer, providing for equal rights and obligations of Bulgarian and other EU lawyers. Furthermore, EU lawyers were given the opportunity to exercise their profession in the country through the establishment of a branch of a foreign law firm and to become partners in law firms and to use the name of their group.

The seminar was attended by more than a hundred participants, including lawyers from all over Bulgaria and representatives from EU Member States. The participants had the opportunity to improve their professional qualification, to exchange professional experience and to make useful professional and business contacts.