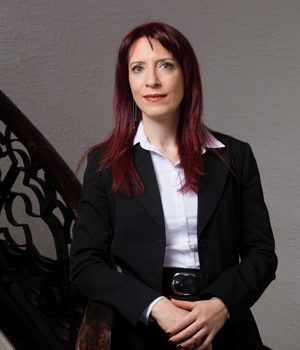 Attorney-at-law Yotova specializes in the fields of Insolvensy and Litigation and ADR.

Kameliya Yotova graduated in 2002 (LLM) from the Sofia University St. Kliment Ohridski with specialization courses in the sphere of Jurisdiction Правораздаване.

In 2014 Attorney-at-law Yotova completed a distance education course under the HELP program of the Council of Europe concerning the requirements for admissibility of applications before the European Court of Human Rights in Strassbourg.

In 2017 she completed a postgraduate qualification in Law of the European union at the Faculty of Law of the Sofia University St. Kliment Ohridski.

By virtue of Order No ЛС-04-336/23.05.2019 of the Minister of Justice, promulgated in State Gazette, issue 47 from 14.06.2019, Attorney-at-law Kameliya Yotova is included in the list of persons, who can be appointed as receivers in inslovency proceedings under the Commerce Act.

She is a member of the Sofia Bar.

Legislative Amendments Related to the Lifting of the State of Emergency

In accordance with the Transitional and Final Provisions of the Amending Act to the Health Act (promulgated in The State Gazette, No 44 of 13 May 2020), amendments have been introduced to a series of laws in relation to the

On 16 March 2020 the European Court of Human Rights announced that it was taking extraordinary measures in response to the unprecedented global health crisis. A message was published on the Registry of the Court. Taking into consideration the decisions

Moratorium on bank loan payments. Opportunities for preserving and restructuring a business

To limit the spread of COVID-19, the National Assembly issued a decision declaring a state of emergency in the Republic of Bulgaria from 13 March 2020, and in order to save the economy from collapsing, there is now a proposal

On 2 April 2020 the EBA published its Guidelines on treatment of public and private moratoria in light of COVID-19 measures (the Guidelines). You can find more information about the guidelines of the EBA from 25 March 2020 and from

The issue of the liability of the State and the municipalities for the damage caused to citizens and natural persons is intrinsically connected with the idea of what the State should be and, accordingly, what are the relations between it

Dobrev & Lyutskanov Law Firm has successfully represented one of its clients in a big insurance case and won the lawsuit for unpaid insurance compensation. Our client is a canning company. In the hot August of 2012 fire broke in

Opportunities for Commercial Banks in the Conditions of State of Emergency

Banks are one of the main pillars of economy in ordinary circumstances and even more so – in the crisis caused by the measures undertaken by the State for limiting and slowing down the spread of COVID-19. The emergency measures

Can We Invoke Violations of ECHR during the State of Emergency

The Convention for the Protection of Human Rights and Fundamental Freedoms (ECHR) is part of the domestic law of the Republic of Bulgaria, which takes precedence over those norms of domestic law that contradict it. It guarantees the protection of

The COVID-19 pandemic has changed the world we live in. The various measures adopted by countries across the globe in an effort to stop the disease from spreading and to slow it down have pushed many business to the brink

The Measures and Actions during the State of Emergency Declared with a Decision of the National Assembly from 13 March 2020 Act changes the time limits laid down in several tax and accounting laws. The National Revenue Agency has also

The EU Member States, as well as many other countries, including the United States, Canada, Russia and others, have legislation which regulates the opportunity for opening insolvency proceedings for natural persons. Two bills were presented in the National Assembly of

New Law for Anti-Corruption and deprivation of illegally acquired property

On January 23, 2018, the Law on Anti-Corruption and deprivation of illegally acquired property entered into force. It contains a number of imperfections and can be considered to contradict to Directive 2014/42/EU on the freezing and confiscation of instrumentalities and

67Th anniversary of the Convention forthe protection of human rights

The 67th anniversary of the Convention for the Protection of Human Rights and Fundamental Freedoms was celebrated on 4 November 2017. The Convention entered into force for the Republic of Bulgaria on 7 September 1992. In accordance with Article 5(4)

The Amendments to the Civil Procedure Code of October 2017

Almost ten years have passed since the entry into force of the new Civil Procedure Code, repealing the 1952 Code. As early as the time of the debates on the bill, some practicing lawyers raised serious objections. Their concerns were

On 31.07.2017 the General Assembly of the Civil College and the Commercial College of the Supreme Court of Cassation of the Republic of Bulgaria delivered Interpretative decision No. 7/2014 on interpretative case No. 7/2014 whereby it addressed important matters related

The Administrative Contract – Essence and Applicability

11_The Administrative Contract Essence and Applicability_16_KY[english] In the domain of civil law, the contract is an agreement by and between two or more persons which is concluded to establish, settle or cancel a legal relationship between them. The parties to

08_Protection of the Rights and Liability of the States for Loss and Damage Caused to Citizens by Breaches of the European Community Law_KY[english] On 8 May 2015, the Supreme Court of Cassation of the Republic of Bulgaria issued a ruling

The Criminal Assets Forfeiture against the Background of the Acquis Communautaire, the Convention for the Protection of Human Rights and Its Protocol No. 1

03_Development of the Legal Action Related to the Revocation of the License of the Corporate Commercial Bank_KY[english] On 6 November 2014, at its session recorded in Minutes No. 27, the Governing Board of the Bulgarian National Bank adopted its Decision

Preliminary Rulings of the Court of Justice of the European Union

11_Preliminary Rulings _december_2013_KY Since the accession of the Republic of Bulgaria to the European Union all public authorities have had the obligation to apply the acquis communautaire. When they observe a contradiction between a provision of a national legislative act

10_Opening of Insolvency Proceedings_november_2013_KY The term “insolvency” has several meanings: (i) a legal institute of norms regulating relationships in cases when a trader cannot repay his debts; (ii) a legal condition in which the trader has only limited opportunities for